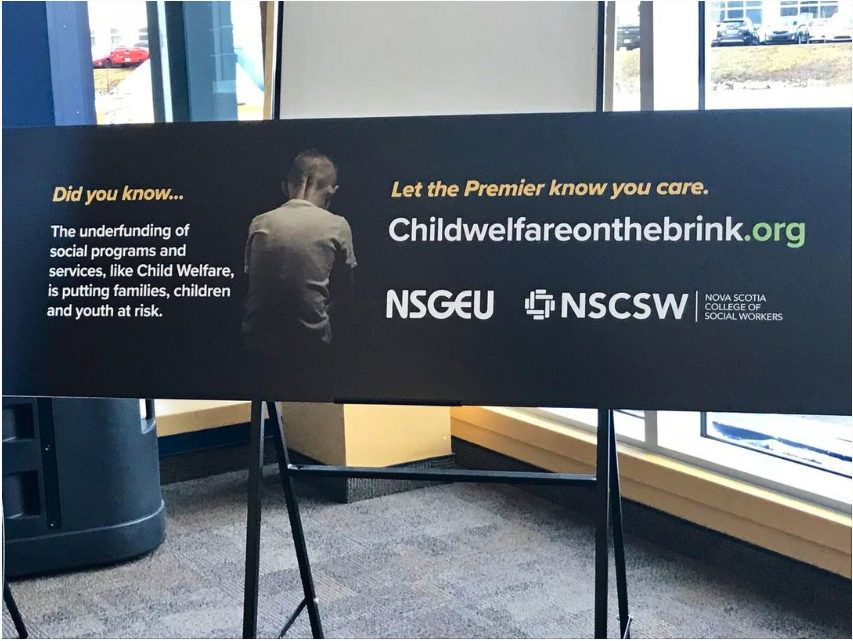 On Monday, January 21st, 2019 the Nova Scotia Government & General Employees Union (NSGEU) and the Nova Scotia College of Social Workers (NSCSW) launched a campaign encouraging Nova Scotians to write to the Premier to demand an increase in spending on social programs including Child Welfare in the next provincial budget.

The campaign #childwelfareonthebrink feature adds on the sides of buses in both the Halifax Regional Municipality and the Cape Breton Regional Municipality as well as social media adds. The adds aim to draw folks into a website childwelfareonthebrink.org  and asks them to share campiagn messages through there social media feeds and send an email to the Premier.

This campaign is part of a larger Child Welfare Advocacy Strategy and part of the strategic goals to become a recognized leader in advocacy and social justice working to protect Nova Scotians. The goal of the Child Welfare Advocacy Strategy is mobilize community voices in order to raise the political and public discourse on the essential role of child protection in Nova Scotia in order to ensure that child welfare is a central platform issue in the next provincial election.

We invite all who can, to join in this campaign as it is an issue that us all.

As social workers we know that the root of the challenges facing the child welfare system are the same impacting all areas of social services. These challenges are rooted in neo-liberal paradigm that has led to:

We believe that in order to bring change to these systems we have to address it a social and political level and participate in a social movement towards broader change. A social movement approach challenges the premise that the current structures and bureaucracies-define the limits of our social reality. Social Movements are often paradoxical: They abandon the logic of current organizations in order to gather the power necessary to rewrite the logic of these organizations themselves. We believe that we have to see beyond economic measurements as a marker of the success of our society. We need to challenge this logic and work to build measurements that include the wellbeing of the entire population.

Over the next 4 years, the is committed to working with the progressive community to redefine the current logic that drives our systems. Our goal is to use scholarly research, public education, and advocacy, to promote discussion and pose substantive questions that are central to the political dialogue in Nova Scotia. As an organization, our goal is to provide new ways to understand social issues and offer political positions that are in solidarity with the stories of the marginalized. In this way, we believe we will be effective at achieving our legislated mandate to advocate for the development, enhancement, and promotion of policies to improve social conditions and promote social justice. As social workers, we have the tools, vision, and values to support this change. Our strategy involves 4-interconnected projects:

If you are interested in getting involved in any of these initiatives there are a number of ways to so.

We look forward to working with all towards a more socially just Nova Scotia.