Our children deserve better: Reflections on how the system failed Abdoul Abdi 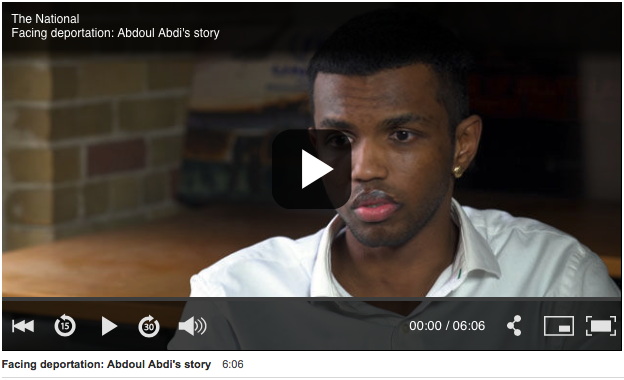 In Nova Scotia, and across Canada, those who receive social services are most aware that too often those services operate in isolation from each other.

Our country has experienced the neglectful application of Jordan’s Principle with devastating results for Indigenous families. For Abdoul Abdi, this gap in services could mean a permanent separation from his family and loved ones.

As you may know, Abdi came to Nova Scotia with family as a six-year-old boy and he and his sister were soon after removed from the care of their Aunts and placed in the province’s care. He remained in care throughout his youth and shared that he was placed over 30 times, with abuse and neglect an all too common thread over those years.

In this interview with CBC’s The National, Abdi explains how this manifested in his adult life saying, “criminal law and children in care go hand in hand”. Abdi describes how conflict in group homes often leads to police involvement and this experience becomes normalized for kids in care. This is a stark reality that must stand out to us as a reality that is unacceptable. Abdi faced the consequences of his actions and rather than being given the chance to demonstrate how he has changed, the federal government is acting to deport him.

Abdi broke the law, admitted his guilt, and accepted his consequence – however, as social workers we know that his worth isn’t predicated on “paying his dues.” He is entitled to the inherent rights and dignities of all Canadians. As a young man, Abdi didn’t know his status in this country – but too often he also didn’t know where he would sleep or how he would eat. He was a child in our care and we failed him.

Rebecca Bromwich refers to the “cradle-to-incarceration continuum” – “a major problem precipitating a disproportion of vulnerable, poor, indigenous and racialized youths from state care into the criminal justice system, and finally into prison.” (From the National Magazine, April 2017). Bromwich advocates for a large-scale reform of child welfare regulation across Canada to interrupt this continuum. Abdi’s citizenship status is an additional layer of complexity.

Premier Stephen McNeil has ordered a review of the Department of Community Services (DCS) policies on migrant children in care – and that’s important.

But what about Abdoul Abdi? What about other adults who may be in this position? We know that there are others, we know that there have been and there will be more. As social workers, how can we ensure that those in care are not subject to this systemic neglect?

Last week the Honourable Jane Philpott, Minister of Indigenous Services, held an emergency meeting on Indigenous child welfare, declaring that “the current situation resembles the horrors of Canada’s residential school system that forcibly removed young Indigenous people from their families and communities.” Child welfare representatives from all provinces and indigenous stakeholders came together to discuss the problem. At that meeting our colleague Cindy Blackstock noted that we have a solution that was written in a federal report on child welfare 51 years ago:

“The provision of child and family welfare services shouldn’t be restricted to the narrow definition of investigating allegations or evidence of neglect of children, but recognition to the prevention of families’ deterioration and professional services given to strengthen and maintain family life.”

We have consistently failed as a province to truly understand the structural issues that impact child welfare. For instance, the additional stressors of income and food insecurity, the continued colonial and racists bias that we have been conditioned to hold, and our continued lack of understanding of trauma are embedded structural issues that profoundly impact the safety of children. This situation becomes compounded more by increasing inequality which leaves the concerns of the oppressed to go unnoticed. This erodes trust, increases anxiety and illness for all which has a lasting impact on a range of social issues.

It needs a paradigm shift.

To achieve this shift, we must continue to engage Nova Scotians in a dialogue that calls out our current political economy. We must take action that challenges us to think beyond the individual and towards the common good. We must ask ourselves if our systems disproportionately push vulnerable, poor, indigenous and racialized youths from state care into the criminal justice system, and finally into prison, then who are these systems serving. Surely, it cannot be the individual, nor can it be in the common interests given the ethical tensions embedded and of course the overwhelming cost of this approach.

To keep our children safe, we must shift our thinking and our priorities. Nova Scotians have the resources and the tools to support and strengthen families in their homes. What we need is the political will to act.

Questions or comments? Add your comments and join the conversation below.

Kate Matheson is a Registered Social Worker with experience in health care, criminal justice advocacy, research, and community non-profits. Kate’s passion for social justice started in the food and beverage industry, and has expanded with each opportunity in education and employment. Kate is passionate about social justice and is currently inspired by her role on NSCSW Council and with the Council’s Candidacy Program Committee.

Alec Stratford is the NSCSW’s Executive Director/Registrar. He has worked as a child protection social worker, school support counselor, community organizer wand as a sessional instructor. Alec has a passion and dedication for community development and believes that engaged informed communities can lead to transformative change. Alec brings a wealth of knowledge on adult and experiential learning and its connection to social change.

5 thoughts on “Our children deserve better: Reflections on how the system failed Abdoul Abdi”